Bars and restaurants are becoming a one-in-the-same identity. Many cities and towns use to have local pubs or taverns where workers and friends congregated just for a drink and chat before getting home for dinner with their families. If they didn’t have anyone to go home to though, they had a crew at the local pub who looked after and checked in on them, a chosen family. Oak Square in Brighton lucks out in having one of the longest running taverns in its neck of the neighborhood located at The Last Drop. From locals to students, to running groups, and even charitable neighbors this local staple has brought in people of all backgrounds to become regulars who frequently pull up a seat at the bar. Many residents actually come together throughout the year to support a local chapter of a worthy cause out of The Last Drop. I sat down with a committee member of the local chapter to hear about this interesting relationship between these two groups. 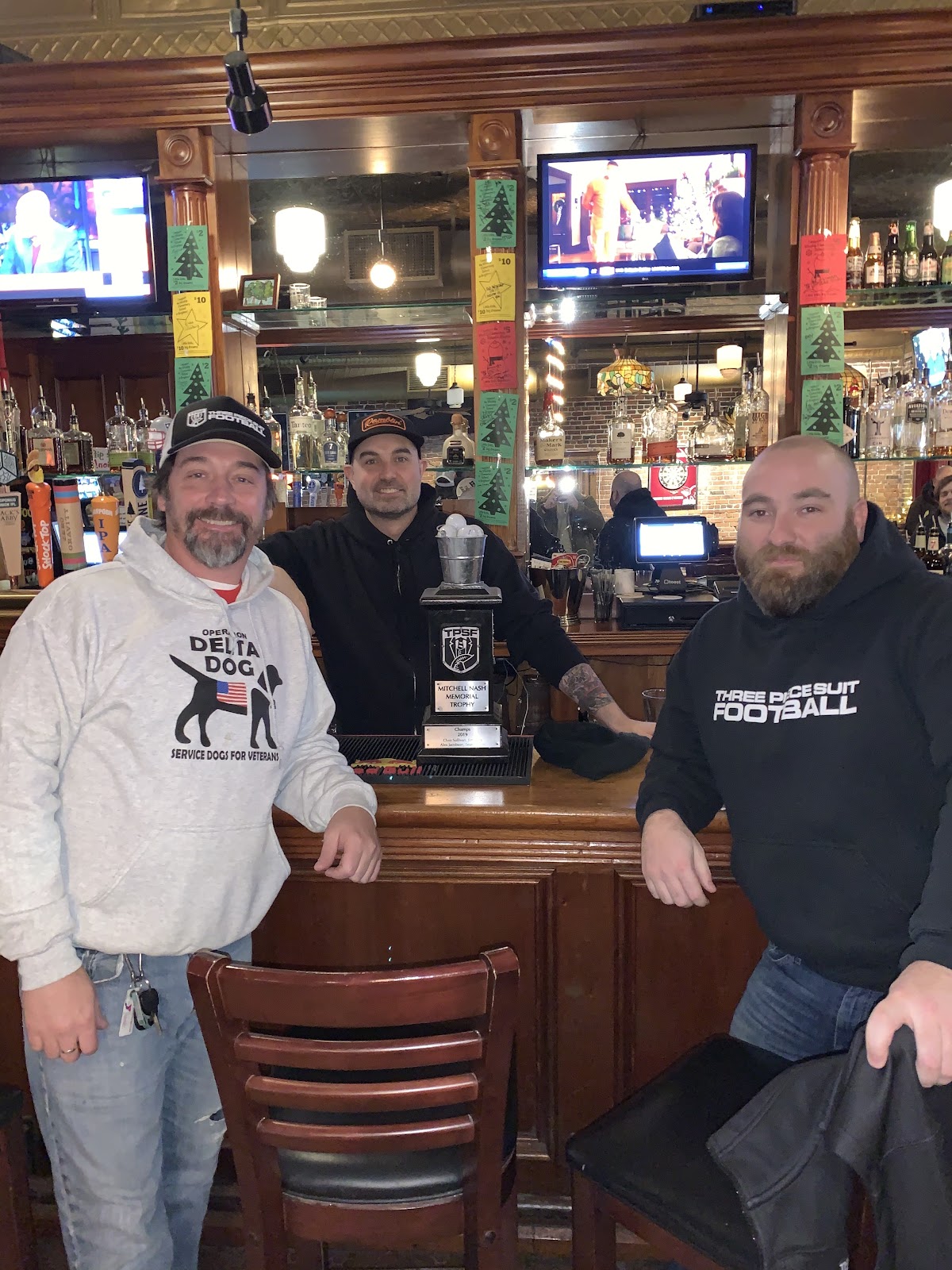 Randall is the VP of the Boston Chapter of Three Piece Suit Football (TPSF) and a Brighton native. “The Last Drop has been under the current ownership since about 1988-1989 but this space has been a meeting spot for neighbors since before I was born. It almost has this romanticized feel to it, and it is not just because of the way it looks inside, but there is a generational identity to this pub that has helped us in creating the TPSF community here.” TPSF is a charitable foundation that supports Operation Delta Dog whose mission is to pair dogs with veterans who suffer from Post Traumatic Stress Disorder (PTSD) as they readjust after being deployed. “Doug Bacon, the owner, has been so generous to give us this space to organize for TPSF. Doug even generously donates every year to our two events, the TPSF Football Tournament and the Golf Tournament.” And speaking of their golf tournament, even that has a tie to the community built at The Last Drop. Randall shared with me that when he joined TPSF in 2016 he was in charge of putting together the tournament. And what does one naturally do when planning an event but ask the question, “will people even show up and participate?” Well, a neighbor by the name of Mitchell Nash signed up a foursome for the tournament almost immediately to help support a great cause. The night before the tournament, Randall received a call that Mitchell had passed away suddenly. “I was beside myself, and I almost talked myself into cancelling the tournament. Many people reminded me though that the reason Mitchell supported this tournament and this organization so quickly was because of the good it does for our veterans, but to also support his neighbors.” The committee each year now, since his passing, has given out the Mitchell Nash Memorial Trophy to the winners of the tournament. 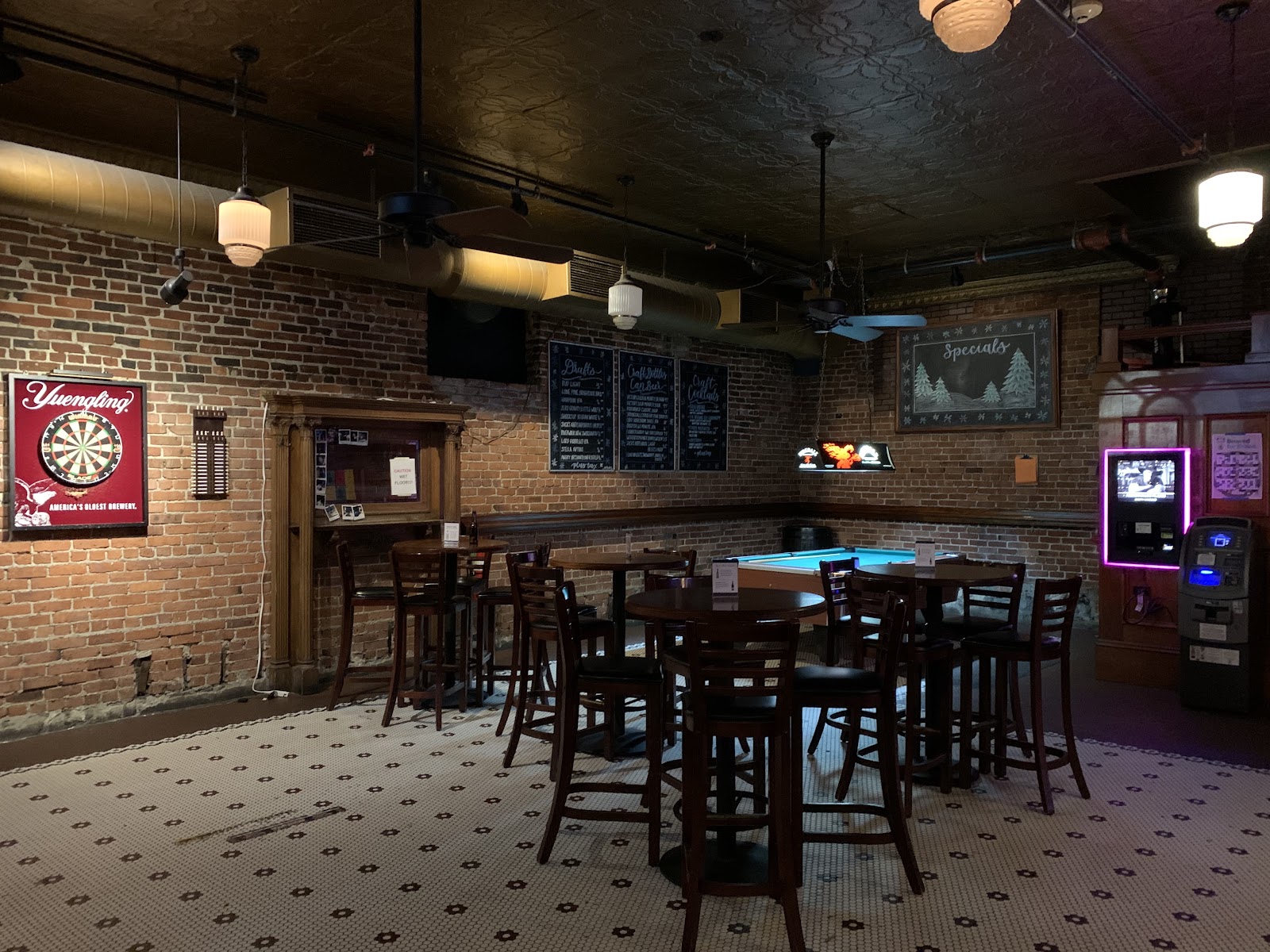 The bar has a historical feel to it with the exposed brick and tiled floors. You can even play a game of pool or throw darts with your group.

Randall cannot help but beam a little about the fondness of the work he gets to do with TPSF at The Last Drop. “This was my parents spot when they came to this place while I was growing up, and now it has turned into mine. The name of the bar is just so fitting to the type of place it has been to this neighborhood over the years. The Last Drop has the “Latest Last Call” in the city, but it is also the last of its kind when it comes to a local pub. A meeting spot for so many people like the ‘Brighton Bangers’ running group, or even as the place to go after the annual parade or the tree lighting, it is nothing more or less but a place to simply be a part of the community.” I then notice the decorative slips of paper that cover the wall for those who gave $5 or $10 in support of the Winship School. It is a bar, there is no escaping that, but it is more than just a place to let loose while being safe. What you can also find when you are behind its red exterior is a neighbor who is there to support you or willing to get to know you, if you just pull up a seat at the bar. Help Brighton Main Streets by considering the Power of Giving Ten.